This is for all of our lovingly nerdy readers, so please be prepared for some space puns. We introduce you to the metal Star Wars cover band, Galactic Empire.

Bringing you the orders from the empire itself with metal beauty, Galactic Empire is a metal band made up of Bass Commander (bass), Red Guard (guitar), Dark Vader (lead guitar), Kyle Ren (guitar), and Boba Sett (drums). Together they made a sound that’s out of this world. It all started in 2015 as a mere gag for an opening band. Over the past few years, it’s become much much more than a gag.

“These instruments are crude but should be adequate to shred some faces as we journey across the galaxy. We have been doubling our efforts to complete our debut full-length album in time for the Emperor’s arrival. If you are not part of the Rebel Alliance or a traitor, buy our single on iTunes and prepare to succumb to the Dark Side upon our album’s release,” says Dark Vader of the Galactic Empire.

Performing classic pieces from the iconic soundtrack of the Star Wars films, the galactic empire brings musical tribute to the works written by John Williams. Williams is a world-renown composer, conductor and pianist with over 6 decades of experience. He is widely known as one of the greatest film composers of all time contributing music to films such as the Star Wars Franchise, Jurassic World, The BFG, Harry Potter, Indiana Jones and so much more. Williams is one of a kind with a rather old school mentality.

“I work very much in what some would consider old school, in front of the keyboard with pencil and paper. The piano is my favourite tool. Over the decades there has been so much amazing technological change in the music business, but I’ve been so busy I’ve never retooled,” Explains Williams.

Galactic Empire has done some fabulous collaborations with other bands. They have toured throughout the world and with a great range of bands. While touring in the winter of 2018, they opened for Mac Sabbath. During BabyMetal’s Japan tour in 2018, the Galactic Empire was invited as a special guest. Now those concerts would have been amazing to see!! 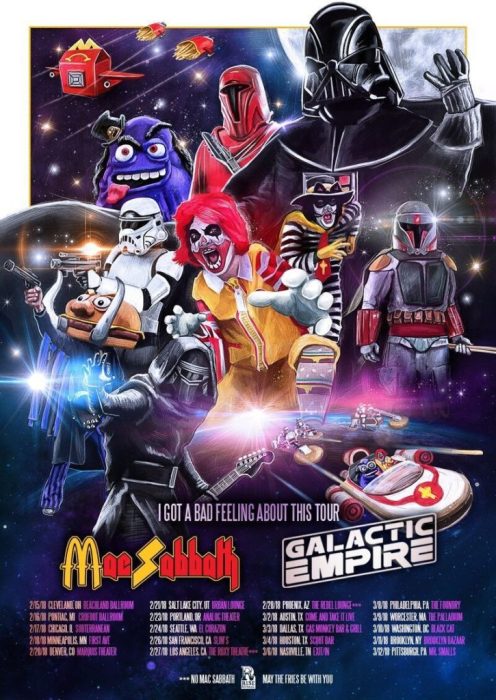 While touring in the winter of 2018, they opened for Mac Sabbath.

During BabyMetal’s Japan tour in 2018, the Galactic Empire was invited as a special guest.

But there’s still time to see Galactic Empire in concert. During 2020 and 2021, they are heading to a galaxy near you with their tour of starry goodness in the fight between the light side and the dark side.

Reviews from earlier concerts certainly speak up the Empire. This is not a show you want to miss regardless of your obligations to the light side.

“I was really happy to see these guys on their first tour. The stage props and costumes were really well done. Above all, the musical arrangement was amazing, and the set list was totally rad. They made the 8-year-old Star Wars fanatic child and a 22-year-old metalhead in me party at the same time. 10/10 will see them the next time I can,” comments Iman Haque.

Here are some of their popular covers for your listening pleasure! Feel free to find their tunes on iTunes as well.

The Emperor wishes everyone a great holiday season and a Happy New Year! Where do you want to see us in 2020?
Photo Credit: Bob McCoy pic.twitter.com/JOhjeWBYsy

Comment below your thoughts and as always, may the force be with you!

This site uses Akismet to reduce spam. Learn how your comment data is processed.